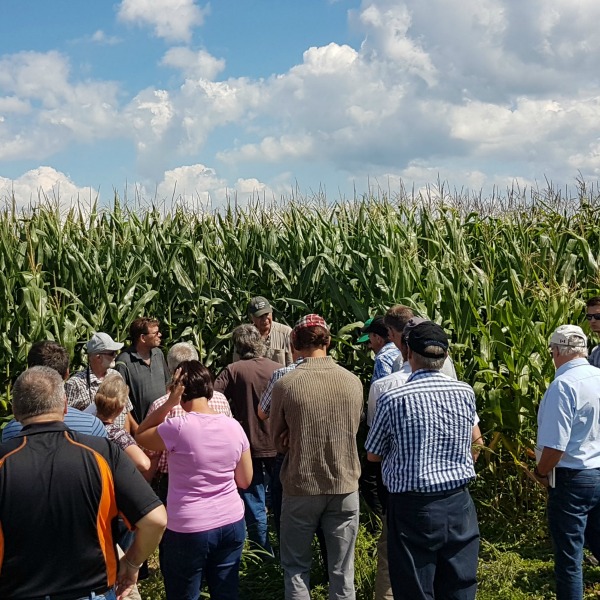 “With ever-increasing costs and tight margins for conventional commodities, organic production offers an opportunity for farmers to increase their net returns without having to expand acreage,” says Rob Wallbridge, Organic Specialist with Thompsons Limited.

“Ontario cost of production budgets (from OMAFRA) show an average $200 per acre per year increase in returns for a standard field crop rotation in organic compared to conventional production.”

Current premiums on organic commodities also provide an attractive incentive for progressive farmers looking for a return on intensive management.

“A conventional farmer who can increase his soybean production by three bushels an acre stands to gain $35 to $40 per acre.  An organic farmer who does the same will gain around $90 per acre,” explains Wallbridge.

A number of influences affect the organic price premiums available.

“Large food processors and brands such as Costco and Walmart have entered organics.  The  health sector has focused attention on organics as a source of health and healing,” he says.  “The rising demand for organic chicken and pork especially are driving the grain values and creating markets for imports.”

On the other side, there are also negative price pressures.  In particular, Manley points to increasing domestic organic production and growing imports from Asia and Europe.

“Organic production is going mainstream and we live in a global market. Farm gate prices are strongly influenced by the value of the Canadian dollar,” he advises.

“Long-term revenue needs to be the focus,” says Sam Raser, Manager of Organic Procurement at Grain Millers Inc. of Minnesota.

“Organic farmers look at a five-year plan versus ‘what am I going to make this year?’  For example, organic farmers understand the importance of that cereal crop year to the yields of their other crops,” he adds.

And producers need to closely monitor their soil tests.

“Successful organic farmers are soil testing every  year, balancing and building their soils, and managing their crops intensively. The good news is a well-managed organic cycle builds on itself.   It generally gets easier and less expensive to grow great crops each year,” says Wallbridge.

And the benefits from such practices can also be realized on conventional farms.

“I’m seeing conventional growers, who put a strong focus on building soil health, are able to grow corn crops with a fraction of the synthetic nitrogen that’s typically recommended,” he says.

For those looking to learn more the Guelph Organic Conference runs late January each year and offers a variety of workshops on organic crop production as well as 2 day free-entry trade show.  Grain traders, equipment suppliers and certifiers exhibit.

“The Guelph Organic Conference is a good place to ask questions of organic grain traders.  Questions about quality expectations, opting out of contracts in case of crop or quality failure, consequences of a quality problem at delivery, sample requirements, storage requirements, who pays for transport and the consequence of a truck being less than full,” says Manley.