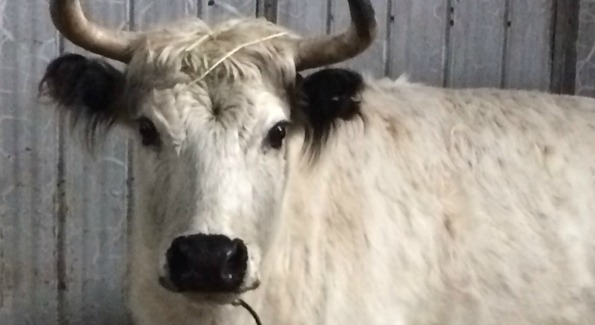 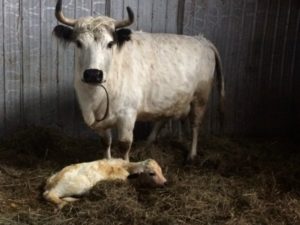 “Can’t tell you how thrilled Elwood is….” – Pam

Some additional background information from Pam of Rare Breeds…

Winston Churchill shipped a herd of White Parks to Canada during the World War Two – London Blitz in 1940. He felt they were one of Britain’s most precious assets. They had been brought to Britain by the Roman’s when Christ was a lad & had stood the test of time. The real threat of invasion forced Churchill to ship many valuable artifacts to safety, including these cattle.

They first settled at the Toronto Zoo; some were sent to the US & some stayed in Canada. Sadly, the record for the Canadian herd is very poor due to a combination of unfortunate reasons.

Hopefully that will soon change with Elwood’s determined effort. Their health & breeding status had to be completely over-hauled and literally began from zero, with several conception attempts in the beginning. Hopefully they are on track now and will be kept in-calf to maintain optimum health.

The fabulous little heifer is picture-perfect which makes her even more special. Their markings are stunning.